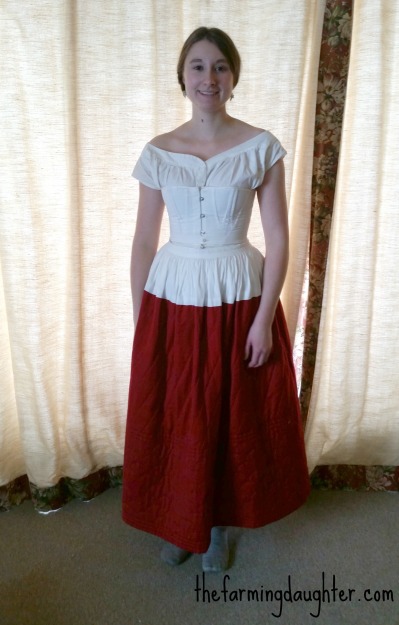 It only took me 1 1/2 years to sew and 1 1/2 years to blog about, but here is my quilted wool petticoat! In 2013 I met a lovely lady named Judy at the Genesee Country Village Civil War reenactment. During a rainstorm I ducked into George Eastman’s (the founder of Kodak) boyhood home where Judy was demonstrating hand quilting. She kindly offered me both shelter and a lesson in her craft! I had a most enjoyable time and decided to start my own quilting project after the reenactment.

I determined on making a quilted petticoat because: 1.) I already had the wool flannel fabric I needed, 2.) I always get cold at events, and 3.) A petticoat is hidden under your skirts so no one would see my beginner stitches 😀 I was inspired by the quilting design on this original silk quilted petticoat from thegracefullady.com:

I decided on 3 horizontal quilting lines at the bottom of the petticoat, a chunk of shell design, 3 more horizontal lines, then the diagonal lines. The main body on my petticoat is three layers: red wool flannel from fabricmartfabrics.com, wool batting, and a cotton sateen lining. I almost wish I had used polished cotton and silk taffeta. It would have been more expensive, but for the amount of work that went into the petticoat it would have been worth it.

I couldn’t really tell from the photos how high the diagonal quilting lines went on the original petticoat, but I had decided to make my petti with a cotton yoke (to reduce bulk) so I made the lines extend all the way up the main body. The wool batting only goes up 2/3 of the body and is a sheet of batting peeled apart to make a thinner layer (I think separated once, and then separated once again to make the batting 1/4 of its original thickness). The yoke is a straight yoke, meaning it is the same circumference as the body of the petticoat (90″).

Before I could begin quilting I partially assembled the petticoat. I sewed 1.5 panels of the 60″ wide red wool flannel together to make a tube 90″ in circumference. I then sewed the cotton sateen on the bottom edge of the petticoat, right sides together, lapping the edges and sewing the last side seam when I reached the end (just like sewing on a faced hem). I laid the red flannel on my ironing board, right side down, and spread my thin layer of batting over it. Then I smoothed up the sateen lining on the wrong side, sandwiching the batting between the two layers of fabric. Using large, sloppy stitches I basted all over the petticoat to hold the three layers in place while I quilted.

To mark the quilting design I used an air and water dissolving marking pencil. I cut the shell pattern out of a sheet of plastic quilting template and just used a ruler for the horizontal and diagonal lines. Since my pencil lines would dissolve after being exposed to the air for awhile I only marked out the section of quilting as I was working on it. I used a large embroidery hoop to hold the petticoat as I was quilting. I chose to go with a contrasting colored thread and used black hand quilting cotton thread that I lightly waxed with bee’s wax. I found a thimble most indispensable!

Since this was my first hand quilted project you can actually see the progression of how my stitches got smaller and neater as I went on. 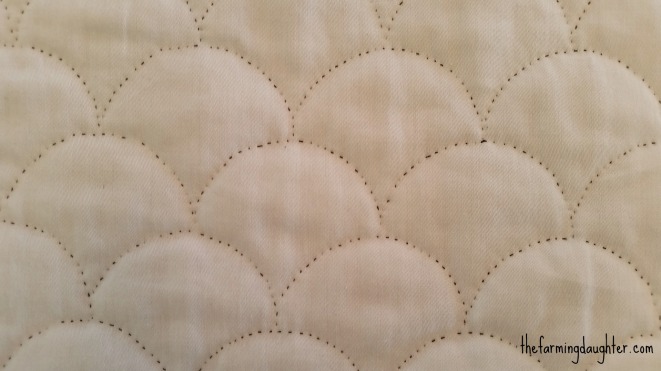 After the quilting was finally done, I attached the straight yoke, hand gathered the waist, attached and hand finished the waistband, and put in a buttonhole and china button.

I might still add some wool hem tape to protect the bottom edge and also reset the waistband since I made it (as usual) too large. Overall though I’m quite pleased with the finished results! The wool does a beautiful job insulating and blocking the wind, but since it’s a natural fiber the petticoat is still comfort to wear up to the mid 60s. The three layers and the quilting give the petticoat a nice fullness and when worn under a dress your skirts have that lovely “boof” of the period. Thank you again to Judy for teaching me this practical and beautiful skill!

Pattern: drafted my own

How historically accurate is it?: The petticoat is constructed using period techniques and the quilting design is taken from an original petticoat. It might have been a tiny bit more accurate to use polished cotton instead of cotton sateen, but I’m satisfied with the authenticity.

First worn: Snowshoeing in my Civil War garb, and then at the 150th Appomattox reenactment

I started to put together a photo review of 2019, but I quickly gave up. I could show you photos of things I did and places I went but the impression they'd give would be misleading. They'd show the good times, but not the best times. They'd show the frustrating times, but certainly not the worst. The truth is I don't have a photo to represent finally leaving the abusive relationship I was in and getting my freedom back. I don't have a photo of the flashbacks I still have and the nightmares that make me wake up crying. I don't have a photo of me flinging my arms around @dpquivey when he drove all the way from Virginia to surprise me, and although you can see it in my eyes, you can't physically capture on camera the joy that is in my life now because of him. I don't have a photo of the physical pain in my body I carry around every day or one sitting in the doctor's parking lot after she told me there's nothing she can do. I don't have a photo of the tears we cried at Grandpa's funeral or how everyone knew to wear red without being told. I don't have a photo of the disbelief and elation when Grandma told me she would sell me my house. I don't have a photo of Mom and Dad praying for me, although I know they both do. I don't even have a photo of all the friends who have supported and encouraged me throughout the year. What I do have, is a heart full of gratitude for the inordinate blessings, provisions, and protections that have come into my life in the year 2019. The older I get, the more I realize how life is a thorough mixture of good times and hard times, pleasure and pain. My prayer for you in this new year is that, through it all, you will still be able to see what I have unshakably come to believe: as surely as the morning comes, the Lord is faithful.
Today I went and signed the official papers on this house. I still can barely believe that it happened. I've been working on getting it fixed up for the past 2 1/2 months and even as I've been sanding, scrubbing, painting, and working until 10:30 at night on it still hasn't felt real. I thought maybe once we signed it would begin to sink in, but now I'm beginning to wonder if it even will once I move in. I owe so much to my parents, my Grandma, Granny and Granddad, and my amazing boyfriend David. Without their assistance and support I would never have been able to take this step. It doesn't escape me what a unique blessing it is for a person of my age and situation to be able to purchase a house. Not everyone gets an opportunity like this and I've found myself questioning why it's been given to me. I don't know the answer, all I know is that I fervently pray this house can not only be my own blessing, but a blessing to all those around me as well. That it will be filled with the love of Christ, that it will be a place of peace, and that no matter who walks through the door it will feel like home ❤
I finished a very "extra" Christmas-y corsage to spruce up my 19th century quilted bonnet today! The old bonnet ties were so skinny they almost looked like strings, so I replaced them with a much wider and fuller set of ties. I used the old ties to fashion a looped bow and some paper flowers I had in the stash to create the new trimmings! The paper flowers had gotten a bit smashed in the closet so I steamed them back into shape over a pot of boiling water. I plan on transporting the corsage in a box in my suitcase, so lookout for an actual completed pic of it on the bonnet next week!
2009 vs. 2019 I think I still have those pajamas...
Back to top
%d bloggers like this: