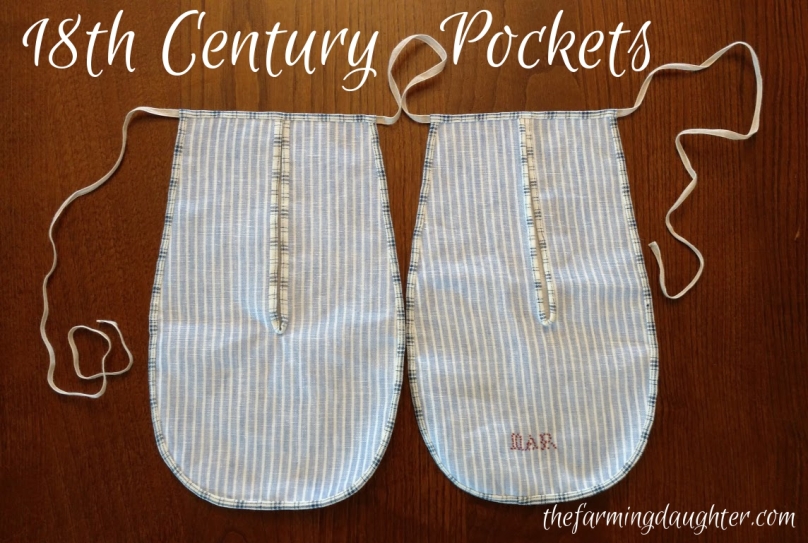 My first item of clothing for my Rev War camp follower kit is completed… a pair of pockets!

Most women, myself included, lament the utter uselessness or total lack of pockets in our garments. Too bad we don’t still use 18th century style pockets! Unlike their modern counterparts, 18th century women’s pockets are roomy and actually functional! Instead of being attached to the garment they are instead suspended on their own waistband/ties. This allows you to change gowns without having to transfer all of your pocket contents and also keeps the pocket from weighing down the skirt. Pockets were accessed through slits in the sides of the petticoats. They could either be a single pocket, a matching pair each on their own set of ties, or a matching pair on one set of ties. To reduce bulk and to prevent me from losing one of my pocket’s mates I chose the latter style.

Many pockets of the 18th century were elaborately embroidered, while others were a pieced patchwork design or printed textile.

There are less surviving plain style pockets, but the examples I could find were the inspiration for my pockets, including this simple linen stripe pocket from the MET:

I have to give credit to my dear David. He drafted the pocket pattern piece for me, gave me almost all the fabrics and supplies I needed, and even cross-stitched my initials for me!

The front of the pockets is a lightweight stripe linen that I flat-lined with a scrap of handkerchief linen I had on hand, just to give it some body. I basted these two layers together before binding the pocket slit with a 1″ strip of blue plaid linen. The binding is back-stitched with a scant 1/4″ seam and then folded over to the wrong side and whip-stitched down to encase all of the raw edges.

Most examples I saw had a plain linen back, so I used a medium weight white linen I had on hand. I basted the front and backs of the pockets together and then bound the edges with more of the plaid linen.

I tacked the linen ties onto the top edge of binding before folding it over to the wrong side and whip-stitching it down.

18th century pockets, just like their modern counterparts, were useful for keeping necessary items handy and personal items safely on your personage. I plan on using one pocket to hold small items I’ll need during an event as a camp follower such as a sewing kit, knife, small pair of scissors, handkerchief, food, brush, etc. The other pocket I’ll use to secret modern items like my car keys, modern cash, and contacts. I can’t wait to get the chance to use them!

How historically accurate is it?: There aren’t as many surviving examples of plain and simple pockets, but the materials and shape are authentic, they’re 100% hand sewn, and constructed in the same manner as a pair of pockets in Colonial Williamsburg’s collection. I should have used linen thread, but other than that I’d say it’s pretty good.

First worn: Just to try on when finished

Cost: Technically free (because David!), but I’d guess about $15 worth of supplies