The biggest Civil War reenactment doesn’t necessarily make the best. While I’ve enjoyed attending the large and exciting sesquicentennial events the past couple of years, this weekend reminded me just how nice the smaller, local events can be too.

Mason, Addison, and I went to the Angelica Civil War reenactment hosted by the 136th NY. The first reenactment I ever participated in was actually this same event four years ago. It was special to be able to come to this event for the fourth time and camp in the exact same spot where my reenacting adventures began! Tenting next to us were also my good friend Emily, her sister Haley, and their friend Aidan.

One of the reasons I enjoyed the smaller event size was it afforded better opportunities for interacting with the spectators. On Friday we helped run one of the education stations that local school groups toured. Our station was “Children’s Games and Toys of the 19th Century”. I gave a short talk explaining some the things children during the Civil War entertained themselves with and then we had various toys, including graces, hoop and stick, Jacob’s ladder, drafts, ball and cup, etc., for the kids to play with.

We also ran the same station the next day for the Boy Scout troops that came. I was talking to one of the scouts later and was shocked to learn that they drive each year all the way from Massachusetts for this event!!

I brought the orphan kitten that I’m raising, Koda, to the event. She also had fun playing with the toys!

The combination of kitten and toys at our camp attracted several children, and Haley, Mason, and Aidan had a nice time playing with them all.

Another opportunity I had for sharing some of my knowledge of the period was Saturday afternoon. I was working on preparing a supper of chicken pot pie and a group of spectators stopped by to watch. I was able to have a very nice conversation with them about what I was doing, how my pie differed from an actual 19th century pie (not killing the chicken myself, for one thing), and food preservation during the 19th century. I love how smaller reenactments help you to get “up close and personal” with the public.

Saturday evening we attended one of our favorite events, the dance! I had asked Addison to do a simpler style for my hair the previous days, but she insisted on making it fancy for the dance. She did a lovely job! 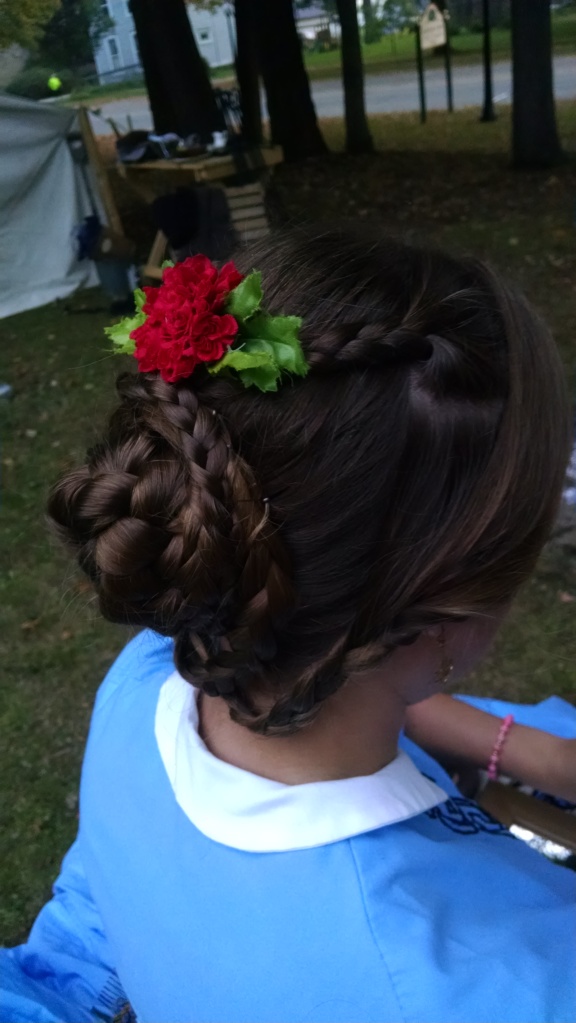 I then did Addie’s hair. She has such a large amount of hair, that any style ends up looking epic! 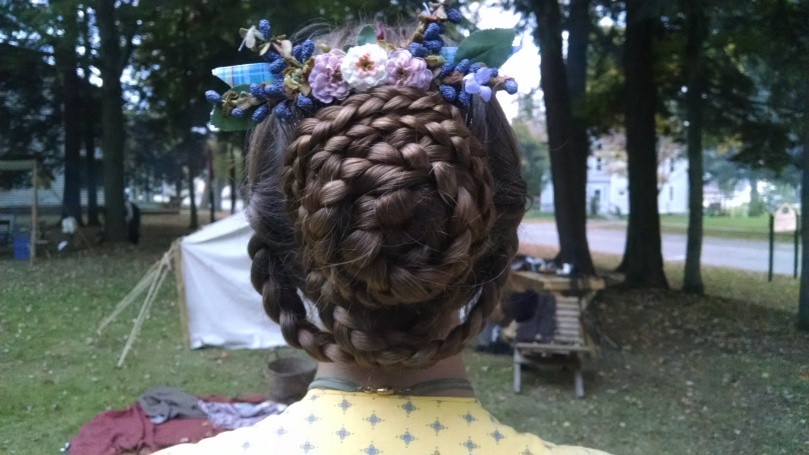 Every year the dance is held in the Grange building. The low levels of light, crowd of dancers, and wood floors make for the perfect 19th century atmosphere.

Sunday after church I had a lovely time visiting my friends Allison and Stephen at their new sutlery (what the shops in tents at reenactments are called). Allison sold me a lovely belt buckle that perfectly suits my tastes, pretty and nice without being too flashy, and Stephen helped fulfill a dream of mine by selling me my own bound copy of Godey’s!! The book is from 1857 and contains all of the issues of Godey’s Ladies’ Book from that year. I can’t wait until I have some time to sit down and explore it thoroughly!

It was a lovely weekend, and a good reminder that smaller events can be fun too!

Many of the pictures in this post were taken by my friend Emily. Be sure to check out her blog post here about the weekend to see more of her beautiful pictures!