Far have I traveled and much have I seen,

“Mull of Kintyre” by Paul McCartney

Dear me! I’m rather far behind posting about some of the adventures I’ve been having. I think I’ve just been too busy having the adventures (and working on the farm, and being a big sister, etc.) to post about them. I’ll attempt to post about what I’ve been up to, starting today with a day hike I did in April.

I went hiking, together with two of my brothers (Marcus and Mason), my cousin Christopher, and our family friend Professor Allan, to Valentine Flats, a part of the 3,014 acre Zoar Valley Multiple Use Area. I had never been there before, but after seeing the steep cliffs, waterfalls, and the creek I absolutely plan on going back.

After meeting up with the rest of our group, we hiked down the steep trail leading into the gorge. Sixty years ago there used to be a farm on the flat land in the valley, and this trail was the former access road to the farm. It was amazing to see how thick and tangled the trees were in an area that had not long ago been cleared farm land. All that remained was the stone foundation of the farm house and a bit of the barn foundation. It reminds me of a verse from Ecclesiastes that says, “A generation goes and a generation comes, but the earth remains forever.”

After the farmhouse ruins, we hiked through the woods and flat flood plain to the Cattaraugus Creek. Near the upper end of the flats we saw a plain tombstone marked “Thomas Dutton”. In the fall of 1826, Thomas Dutton was traveling near the creek on his way to Ashford and was, presumably, drowned. His body was found washed ashore the next spring about 1600 feet downstream. It was impossible for the coroner, Ahaz Allen, to determine, but it was reputed that since the $400 and silver watch Thomas had been carrying were never found he had been killed by a thief.

The area of the creek that we saw was at the confluence of the south and main branches of Cattaraugus Creek.

This was the second hike that I used my new Columbia Vixen day pack. I am in love with it and hope to do a review post soon.

Marcus is going on a week long backpacking trip in July so he wore his new Jansport Klamath pack to test it out. Mr. Allan decided to try it on for size too.

While we were down at the creek we saw a group of white water rafters float past. It looked exciting and fun; I hope to do it some day! 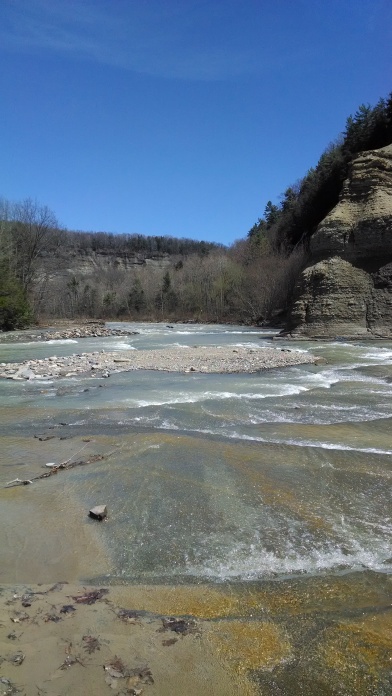 While we were hiking Mr. Allan, ever the instructive professor, amused and engrossed me by expounding on the difficulties the first settlers faced when journeying through these dense woods. He had me imagine what it would be like to be a pioneer wife traveling with my husband and several young children, with all of our scanty possessions in one wagon. It was much easier to envision myself struggling through this arduous terrain when I was actually walking in it myself.

I also noticed these Red Trillium and Coltsfoot blooming. It was so nice to see flowers again finally!

I had a great time at Valentine Flats and would definitely recommend the trail to others!

I started to put together a photo review of 2019, but I quickly gave up. I could show you photos of things I did and places I went but the impression they'd give would be misleading. They'd show the good times, but not the best times. They'd show the frustrating times, but certainly not the worst. The truth is I don't have a photo to represent finally leaving the abusive relationship I was in and getting my freedom back. I don't have a photo of the flashbacks I still have and the nightmares that make me wake up crying. I don't have a photo of me flinging my arms around @dpquivey when he drove all the way from Virginia to surprise me, and although you can see it in my eyes, you can't physically capture on camera the joy that is in my life now because of him. I don't have a photo of the physical pain in my body I carry around every day or one sitting in the doctor's parking lot after she told me there's nothing she can do. I don't have a photo of the tears we cried at Grandpa's funeral or how everyone knew to wear red without being told. I don't have a photo of the disbelief and elation when Grandma told me she would sell me my house. I don't have a photo of Mom and Dad praying for me, although I know they both do. I don't even have a photo of all the friends who have supported and encouraged me throughout the year. What I do have, is a heart full of gratitude for the inordinate blessings, provisions, and protections that have come into my life in the year 2019. The older I get, the more I realize how life is a thorough mixture of good times and hard times, pleasure and pain. My prayer for you in this new year is that, through it all, you will still be able to see what I have unshakably come to believe: as surely as the morning comes, the Lord is faithful.
Today I went and signed the official papers on this house. I still can barely believe that it happened. I've been working on getting it fixed up for the past 2 1/2 months and even as I've been sanding, scrubbing, painting, and working until 10:30 at night on it still hasn't felt real. I thought maybe once we signed it would begin to sink in, but now I'm beginning to wonder if it even will once I move in. I owe so much to my parents, my Grandma, Granny and Granddad, and my amazing boyfriend David. Without their assistance and support I would never have been able to take this step. It doesn't escape me what a unique blessing it is for a person of my age and situation to be able to purchase a house. Not everyone gets an opportunity like this and I've found myself questioning why it's been given to me. I don't know the answer, all I know is that I fervently pray this house can not only be my own blessing, but a blessing to all those around me as well. That it will be filled with the love of Christ, that it will be a place of peace, and that no matter who walks through the door it will feel like home ❤
I finished a very "extra" Christmas-y corsage to spruce up my 19th century quilted bonnet today! The old bonnet ties were so skinny they almost looked like strings, so I replaced them with a much wider and fuller set of ties. I used the old ties to fashion a looped bow and some paper flowers I had in the stash to create the new trimmings! The paper flowers had gotten a bit smashed in the closet so I steamed them back into shape over a pot of boiling water. I plan on transporting the corsage in a box in my suitcase, so lookout for an actual completed pic of it on the bonnet next week!
2009 vs. 2019 I think I still have those pajamas...
Back to top
%d bloggers like this: