Before us in proud humiliation stood the embodiment of manhood: men whom neither toils and sufferings, not the fact of death, nor disaster, nor hopelessness could bend from their resolve; standing before us now, thin, worn, and famished, but erect, and with eyes looking level into ours, waking memories that bound us together as no other bond; — was not such manhood to be welcomed back into a Union so tested and assured?

“The Passing of the Armies” by Joshua Lawrence Chamberlain

Last month, Addie and I attended the 150th anniversary reenactment of the Battle of Appomattox Court House and the surrender of the Army of Northern Virginia. It was slightly bittersweet, not only for the events we were portraying, but also because this is one of the last sesquicentennial reenactments. However, we were able to meet up with some reenacting friends, participate in some special scenarios, and in general had a lovely time.

The obligatory photo of Addie’s tresses…her hair is getting so long!

When planning our meals I decided I wanted to try something new. Allison had told me about cooking “standing meat pies” at Genesee Country Village and they sounded interesting. Then I found this recipe and video from James Townsend & Sons and decided to give it a try. The crust has the same ingredients as a regular pie crust, but you boil the butter and water and knead the dough vigorously. This makes the crust strong and tough. You can eat it if you choose, but the main purpose is to have a sturdy, portable, individual sized bowl and lid. 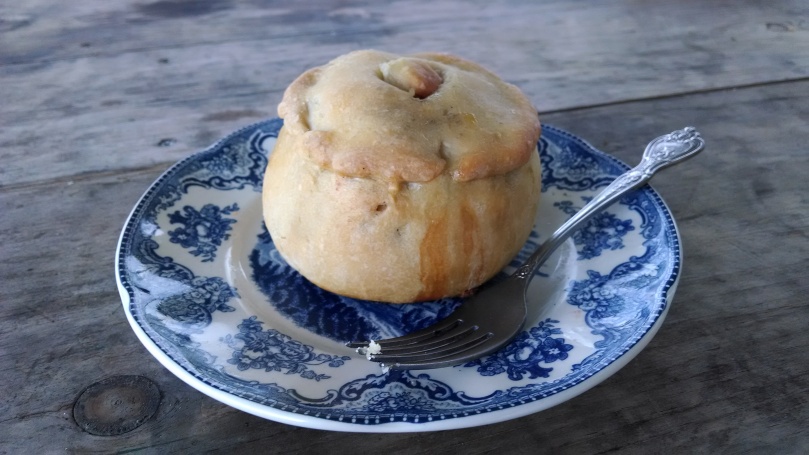 James Townsend recommends pork shoulder for the filling, but I used a cubed ham steak instead. I also opted to use unflavored gelatin, a bullion cube, and water for the lear (gravy) instead of a boiled pig’s foot. 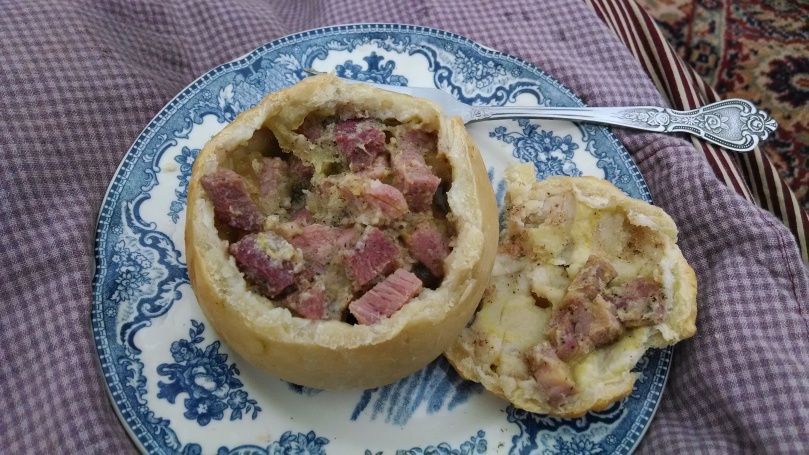 I made the pork pies at home, and then we rewarmed them for dinner in the dutch oven. A rather gusty rainstorm came as we were just about to eat, so we hastened to the tent to consume our supper.

This is what happens when your creative little sister is bored being stuck in the tent waiting for the rain to stop…she makes flowers out of her apron.

Saturday evening we were privileged to participate in a scenario serving rations to the Confederate troops. When the Army of Northern Virginia surrendered the troops had not eaten for several days. General Grant agreed to supply food, and sent 25,000 rations to the starving soldiers. As far as I know, the rations were not fresh ham, soft bread, and hot coffee served by ladies at tables covered in tablecloths, but it was nice to be able to be a part of the event and celebrate the re-union of a divided nation.

Here is a sketch by British illustrator Alfred Waud, who was actually at the surrender, of Union and Confederate soldiers sharing rations:

After serving rations Addie and I went to the dance. The issue with this reenactment was (like most of the big 150th events) everything was very far away. We counted our steps and it was over 1/4 mile just to walk to the bathrooms and back! There were no shuttles to get to the dance so we had to walk over a mile there and a mile back.

The next morning we had agreed to help repeat the ration scenario at the  Appomattox Court House National Historical Park. After the dance we tumbled into bed around midnight and slept until my abominable alarm jerked us out of our slumber at 4 am. We seriously considered if this was worth waking up for, but we decided it was a once in a lifetime event and hurriedly dressed. It took us exactly 1 hour, which for 2 girls to get fully dressed in 19th century garb, in a tent, in the pitch black, and do our hair was quite a speed record in my opinion!

I thought the park would just be the court house and Wilmer McLean’s house (where the surrender took place) but it’s actually a entire restored village of the town of Appomattox Court House. I highly recommend visiting if you’re ever in the area.

When we returned to camp we ate breakfast and then Addie decided to take a nap. The guys wanted her to come watch the surrender ceremony but she decided she could “only go to some many once-in-a-lifetime events in one day”. I decided I would go though, and hiked another mile to the shuttle that would take us back to Appomattox Court House.

The guys formed up:

I don’t think I can sufficiently describe what the surrender ceremony was like. Part of that is probably because I was wandering around in a sleep-deprived fog, but also because moments like that have to be experienced to be understood. I want to extend my heartfelt gratitude to all of the soldiers who participated. This scenario could have come off as contrived, affected, or hollow, but instead the level of professionalism and focus to authentically recreating the actual event made for an emotionally moving display. Especial thanks is due to the Confederate reenactors. You guys have an incredible knowledge and understanding of what the real Southern soldiers went through, and I’m sure this was difficult for some of you to perform. I saw tears in the eyes of many of both the “boys in gray” and the “boys in blue”.

The Confederates marching up through the Union lines:

Forming up into ranks:

Stack arms for the last time:

A few of my guys: 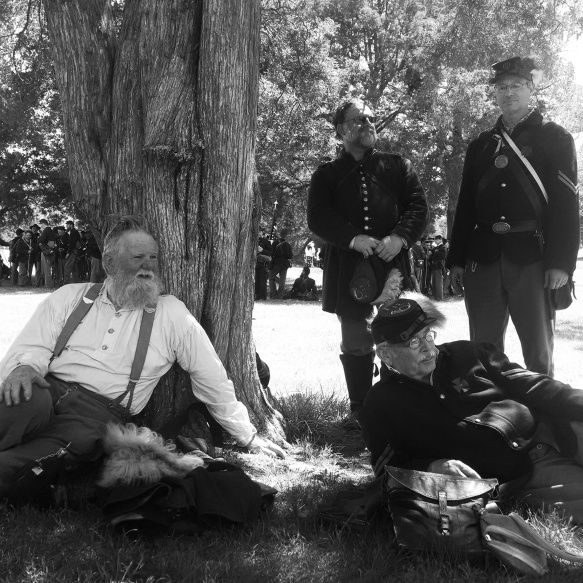 And this is what happens when you dance all night, get only 4 hours of sleep, feed 500 Confederates, and walk 10 miles:

(Header photo is the Wilmer McLean house from Library of Congress.)